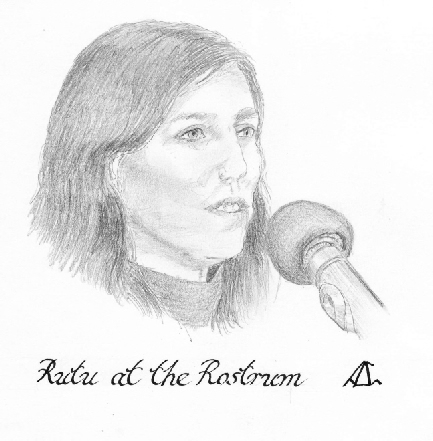 Israeli born Rutu Modan has achieved fame as an illustrator and cartoonist. She appeared at the EIBF with another cartoonist, Canadian Leanne Shipton: with all due respect to Leanne, because of the Israeli connection, this article concentrates on Rutu.

Rutu has published extensively, but she chose to focus on her most recent book, The Property, and to use it as a way to describe how she creates her work. The Property is a strip cartoon story of a young Israeli woman and her Polish born grandmother returning to Poland and the adventures they have as the grandmother looks for a property that her family owned but then lost in World War II. By way of background, Rutu said that it is almost de rigueur for young Israelis to visit Poland as an act of witness to the Holocaust, but prior to commencing the Property, she had not done this. To give her artwork the desired realism, she did then visit Warsaw, but essentially to capture the modern city as the backdrop to her pictures, not to visit Holocaust sites: she explained that her own grandmother had come from Warsaw before the war, and that generation of Israelis viewed Poland very negatively (‘a graveyard’); this had influenced her own view.