In a coup for the Lit, the eminent journalist Jonathan Freedland (of the Jewish Chronicle, the Guardian and Radio 4’s ‘The Long View’, and author of several books both fiction and non-fiction, including ‘Jacob’s Gift’ and the Sam Bourne novels) visited Edinburgh to address an audience of Lit members and others who booked through the University, for this meeting which started off our 125th anniversary celebration. The meeting was introduced by Hannah Holtscheider, who also gave the vote of thanks, and was chaired by Maurice Naftalin.

Jonathan Freedland has long credentials as a commentator on Israel and the Middle East. He is often booked years in advance and finds it quite safe to give as his title “The Crisis in the Middle East” because there will always be one. In talking about Israel’s relationship with the Diaspora he started with a personal note, “Israel and Me”. He described how, on his sixth birthday, he was presented with an ‘Israel at 25’ teeshirt; when he turned 9, Israel pulled off the Entebbe raid to free Israeli hostages from a plane hijack; while when he was 12, Israel won the Eurovision Song Contest 2 years in a row and Sadat, Begin and Carter had their famous handshake at Camp David. He was a member of the Zionist socialist youth organisation, Habonim, and his gap year was Shnat Hachsharah, which was supposed to prepare senior members of Habonim for their Aliyah, and life on a Kibbutz, which was the aim of the movement. In addition, his mother was born in Petach Tikvah, was the rare Jewish holder of a Palestine Mandate passport and could not be more staunchly Zionist. When he debated publicly with Melanie Phillips, she agreed more often with Melanie than with her son. Jonathan stressed that he was still a Zionist and a lover of Israel and his criticisms of Israeli Government policy and behaviour had to be heard in that context.

Most Jews have complex feelings about Israel, ranging from relief that there is a country providing sanctuary for Jews, pride,anxiety and concern. For many there is an attachment to an imagined ‘Israel of Innocence’ which existed before 1967 and which is contrasted withIsrael as an occupying power. But the Occupation has lasted for 47 years of Israel’s existence,while the supposed ‘age of innocence’ behind the pre ’67 borders only lasted 19years. In accordance with the recently published book by Ari Shavit, ‘My Promised Land’, it is also necessary to question whether there ever was an ‘Israel of Innocence’, as the 1948 War of Independence involved atrocities against the indigenous population, such as the massacre of 300 Arabs at Lydda and the flight of the remaining population, described in forensic detail by Shavit. Something like a Truth and Reconciliation Commission will eventually be required in order to deal with these uncomfortable events.

Jonathan used to think that the Occupation should be ended once there is peace, a quid pro quo. Now he believes that the Occupation has to end come what may. It is a moral necessity to end it and it is essential for the moral health of the State of Israel.As the late Lord Jacobovitz, who was consistently against the Occupation, said, “It is not right for Jews to lord it over another people.”Not only does the Occupation demean the State of Israel, but it also plays into the hands of the Boycott, Divestment and Sanctions campaign, which would lose all force if the Occupation ended. In addition, if there is a policy of creeping annexation, this will not work because there is a demographic time-bomb that will end the existence of the Jewish state if annexation takes place.

US Secretary of State John Kerry is to be applauded for continuing to try to broker the Two-State Solution but the prospects are bleak. The deal offered is less favourable to the Palestinian side than under the agreement that was on the table in the time of President Clinton. The message to Israelis that it pays to be intransigent and to keep on building settlements. Jonathan expressed the view that the Two State solution must involve no less than 22% of the territory comprising Israel and the Occupied Territories becoming part of the new Palestinian State as this was the percentage that was Palestinian pre-1967,being a lot less than the amount voted by the UN in the Partition vote of 1947- nearer 50% each. The Palestinians had long given up the aspiration to 50%.

Faced with this impasse, what is the role for the Diaspora? We can be bystanders or we can speak out. Jonathan believes that the Diaspora has the right to voice an opinion about Israel. No-one worries hesitates to voice an opinion on other countries where we don’t agree with the Government, such as Syria or Russia, so why the hesitancy on Israel? We have spent decades defending Israel so we have earned the right to speak out. It is as if we had a loved one who was about to accelerate in a car towards the cliff.Wouldn’t we shout a warning?Israel is like that loved one– we need to call out a warning based on love and concern.

Is there a precedent for this? When the Northern Ireland peace process was underway, Jonathan was in Washington, covering events for the Guardian. The role of the Irish Diaspora in this peace process was critical. The influential Irish supporter sin the USA were simply not prepared to fund continuing violence.

By contrast, whenever Diaspora leaders try to speak out, it causes a big scandal. For example, recently, Mick Davis, Chairman of the Jewish Leadership Council, a staunch Zionist, wrote an article for the Israeli newspaper Ha’Aretz, in which he had criticised the policies of Benyamin Netanyahu, and this has divided the British Jewish community with some questioning his right to express an opinion. The affection for Israel that characterises people like Jonathan Freedland is being lost in the new generation. Non-affiliated Jews who want to discredit Israel are attracted to the Boycott, Divestment and Sanctions movement and could not care if Israel remains a Jewish state. Only the organisation Yachad provides opportunities for British Jews to campaign in favour of the Two-State solution from a position of supporting Israel.

Concluding, Jonathan said that it was a lonely position to be passionately attached to and intimately bound up with Israel, yet be willing and able to criticise its actions in public. He likened it to the patriarch Jacob wrestling with the Angel– fighting it yet holding onto it at the same time.In a long and intense question and answer session, many concerns were raised. The audience largely supported the speaker’s position though there were some voices expressing the view that Israel has the right to defend itself even if this means continuing the Occupation. The exit from Gaza had shown how giving up an occupation could result in rockets being fired across the border with impunity.

Some wanted to know how to criticise Israel in public without playing into the hands of those who regard Israel as just another oppressive country that needs to be condemned, and who are looking to quote Jewish voices in support. Others wanted to know the source of Jonathan’s information and whether there is support for his views within Israel. (All his information comes from the Israeli press itself). Some wanted to the speaker to comment on the position of Arab Christians and of Israeli Arabs. The issue of the surrounding Arab nations, each with their own problems (“The pre-occupied territories”) was mentioned. Another topic was what to do about the settlers, who are scarcely settlers any more but economic migrants living in large well-established cities. The 22% 78% split was also questioned, as to whether Gaza was included and whether perhaps a 3 state solution might be on the cards.

It was impossible to deal with all the points in detail but the speaker did his best. When asked whether 22% included Gaza he was not sure – this would have to be checked. He had deliberately avoided Gaza which would be a whole other talk. The22% would not have to be all the current area beyond the Green Line. The boundaries could be re-drawn so as to include some of the larger Israeli settlements within Israel, and transfer some predominantly Arab parts of Israel to Palestine, such as the Triangle, although this was controversial. The end result might be that 70,000 hard line settlers would have to choose whether to move back into Israel or to be a Jewish minority in a Palestinian State. In discussing the One– State Solution, which used to be the preferred Palestinian approach, meaning the end of the Jewish State, Jonathan informed us that there are now Israelis who favour such a solution, mainly from the far right of Likud,and he named some names. Tacitly these politicians think that the problem of the Palestinians will be solved by making their lives hard– they would not necessarily be given a vote and they might well decide to emigrate as many have already done. But there are other softer voices who would be prepared to take a risk and give everyone the vote in a single State, leaving the demographic time-bomb to work itself out as it may.

The trickiest question of how to speak out without playing into the hands of those who would happily do away with ‘The Zionist Project’ was answered by saying that in practice one always knows who are ones friends. Jonathan Freedland will not lend his support to those who deny Israel’s right to exist.

Tying up the loose end with which he started, Jonathan clarified his views on the question of coming to terms with 1948. This would require some form of change in the ceremonials of Zionism to make it easier for the Arabs to accept the State. For example it is uncomfortable that Israel’s only Arab Supreme Court judge cannot sing Hatikvah, as it does not express his hopes and aspirations. It is uncomfortable that Israel Independence Day in no way acknowledges the effect on Palestinians of what they call The Naqba. And it is difficult to accept that400 former pre-48 Arab villages lie in ruins without a memorial, many built over with new Jewish facilities. For some reason the late Ariel Sharon used to call Israeli places by their Arab place names. Why was that?

The session could have gone on a lot longer with so many unanswered questions but time constraints meant that it had to end. It was a privilege to hear such an eminent journalist at first hand on this topic so critical to the hearts and minds of Jews. The event proved a perfect prelude to the Lit’s 125thanniversary event. 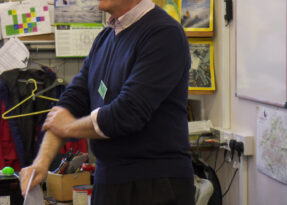 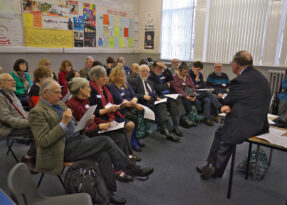 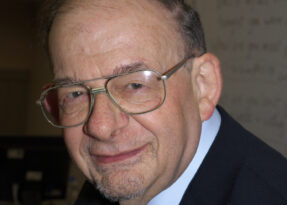 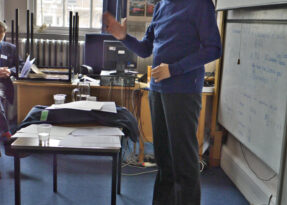 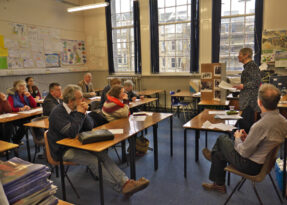 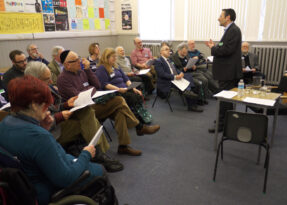 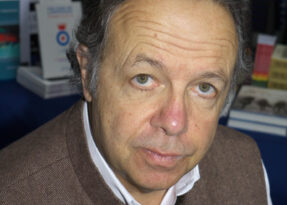 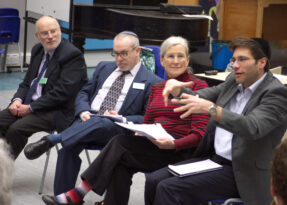 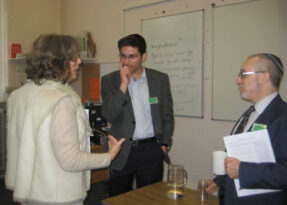 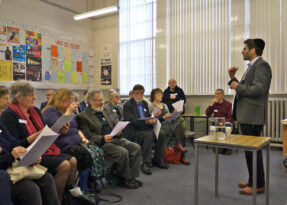 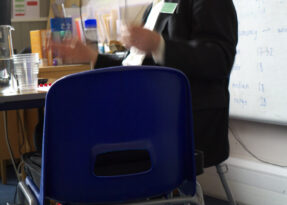