In 2012, Sukkat Shalom donated part of their Kol Nidrei Appeal proceeds to Physicians for Human Rights – Israel. Later, the UK representative of that organisation, Miri Regev, was invited to speak about their work. Her moving and disturbing account was the inspiration for the 9 day trip organised by Maurice Naftalin, which was the subject of this Lit meeting. Avery Meiksin chaired the meeting.

Maurice explained that the group had given themselves a demanding agenda over 9 days, focusing on organisations with a human rights or co-existence focus, rather than political parties, religious groups, settlers or militants.

On some days they split up and went to different places so there were 6 members on the platform to tell their stories.

The aims of the trip were:

They were not going to suggest that they had solutions and indeed the result of the trip, for some, had been more concern and uncertainty than before.

Gillian Raab led off by describing a visit to a village near Sevastiya on the West Bank where Physicians for Human Rights mobile clinic was working that week. The healthcare workers are Israelis who are willing to give up their Saturday (when Israeli facilities are closed) to volunteer for the clinic, as well as Israeli and West Bank Arab volunteers. One of them is a 90 year old nurse called Pnina Feiler who was a vocal critic of the current Israeli government. The village headman met the group and explained the problems of the village which is situated near an expanding Israeli settlement which is cutting off their access to their historic land and water resources. While the clinic was being run, the group had time to explore the area, Gillian and Rabbi Mark Solomon took tea with a local family and the group visited Sevastiya where they walked down a Roman road among the ruins of Herod’s palace, which are in no way protected. The visit left the group feeling sad that healthcare for these villagers depends on healthcare workers giving their days off as they cannot officially provide the service.

Rabbi Mark Solomon continued the presentation with an account of the group’s visit to Hebron, containing up to date information about this city which is hard for tourists to Israel to visit. Everyone knows of Hebron as the place where Abraham purchased the Cave of Machpelah as a family burial ground and where the patriarchs and their wives are entombed, making it sacred to both Judaism and Islam. The fine Mosque/Synagogue complex above the cave is currently the only shared space in the city. Complex arrangements have been worked between the Islamic and orthodox Jewish authorities about the use of the building. The larger section is officially the Mosque and the smaller the synagogue, but swaps can take place or either group take over the whole building depending on the needs of the religious calendar.

The rest of the city is now clearly demarcated. Four small Jewish religious settlements have planted themselves in the city in areas that used to hold the Jewish population before the massacre of 1929. Where there are Jewish settlements there is army protection and the Arabs living in those areas have either had to abandon their homes and businesses or live under strict control over their comings and goings. A former bustling market is now a deserted street of boarded up stalls. A handsome street of apartments with balconies is still occupied by Arab owners, but they cannot use the entrances and balconies that face onto the street. They have to come and go by back entrances and the front is all boarded up and covered in barbed wire. This is for their own protection as if they were visible at the front they could be stoned by the settlers. Elsewhere in the city settlers have built their own walkway at upper level and don’t hesitate to chuck stones and rubbish down on Palestinians passing below.

Hebron now has a new Arab market, but just as the Jewish areas are protected, so Israelis are not allowed into the Palestinian sections. (Israeli citizens are forbidden by the Government from entering Palestinian urban areas). Only those members of the tour who had remembered to bring their British passports could visit the market.

The guide for the Hebron visit was from ‘Breaking the Silence’, an organisation of Israeli ex-servicemen who feel they have to speak out about the realities of their national service. Nadav Bigelman served in Hebron in 2008. He told the visitors that the IDF constantly carried out raids on Arab homes as a projection of power just to show who was in charge. He deplored the division of the city but paradoxically felt that the co-existence demonstrated in the Mosque/Synagogue complex provided the only spark of hope.

The next speaker was Judy Sischy, well known for having brought Windows for Peace to Edinburgh in 2008 and in 2010. She told us about House 57, the guest house in East Jerusalem where the group stayed and were able to reflect together on their experiences. It is near the trams which are very good! She explained how conflict over water was a major theme of the visit. In East Jerusalem the Arab population does not have daily access to mains water and when it is turned off they rely on black storage tanks on their roofs. She also talked about a visit to Bethlehem, where their guide was George Rishmawi, the Coordinator, Siraj, Center For Holy Land Studies. Mr Rishmawi is an educated man who is the third generation to live in the refugee camp. When asked why someone like him was still in a camp, he explained that there were some economic and social benefits to living in a refugee camp. This shed an interesting sidelight on the complexity of the Palestinian refugee problem. For Judy, the final day, which included a visit to Windows for Peace, was particularly special. She showed a picture of Ruti, the Israeli Founder of Windows for Peace, with two of the young women who had attended the conference in Edinburgh. One was Jewish and one Arab and it was impossible to tell who was which religion. They are both now at university. Ruti summed up the political issue with “We are not yet ready for a One-State solution and we are nowhere near a Two-State solution.” Yet at the basic human level these young people got on very well.

Cathie Wright had joined the trip in order to find out the truth behind the stories in the newspapers. Her report focused on visits to unrecognised Bedouin villages. One of these was al – Araqeeb, at which the guide was Arik Ascherman, Executive Director of Rabbis for Human Rights. This village has been the subject of a noted Israeli court case which refused recognition. Since then it has been demolished and rebuilt several times. The villagers claim that the Israelis are trying to clear land to make way for afforestation, but in doing so they are destroying low maintenance historic farmland and replacing it with water- hungry trees that yield no crops.

In the Jordan valley the group visited another Bedouin village which was only a few metres from the Jerusalem – Dead Sea motorway, but that could only be reached by parking illegally on the road and then scrambling on foot up hill and down dale to the location. This village has got a mud-brick school built by Italian volunteers which has so far survived all attempts to remove the encampment. Water was a major issue for this village as they could hear water in underground pipes which is serving a nearby settlement, while they themselves had no regular mains water and had to rely on piped water twice a week supplemented by tankers.

The final speaker was Sue Lieberman, who was called on to summarise the essence of the trip’s impact. Having been to Israel 3 times in the last year for different reasons, she had experienced in different ways the impact of being there. She thought that Herzl’s aim of ‘normalisation’ was a forlorn hope given the circumstances of Israel’s foundation and development. There is a land conflict and a power conflict, and Jews outside are likely to experience conflicted feelings over this as long as the conflict itself continues. Separation has over the years become a psychological and physical fact with the Separation Wall growing and Israelis being deterred from going anywhere beyond it. Palestinians by contrast do find out what is on the other side of the Wall as some of them have permits to work in Israel. The Occupied Territories are Israel’s dark side, in a psychological sense, onto which they project their fears, and she saw little hope for change in the short term.

In the question and answer session that followed many more interesting points and details emerged. The most intriguing line was articulated by Rabbi Mark Solomon. He said that until he went on the trip he had been a convinced supporter of the Two-State solution. However the trip had convinced him that a One-State solution, though impossibly distant, was the only real way forward. More and more, young Palestinians are saying that they would accept any solution that would allow them to access the land beyond the Separation Wall and particularly to sit on the beach in the evening and have a coffee. But how can this become the policy, when since Oslo the Two- State solution has been the only one on the table? It needs a paradigm shift and it is hard to see where this is to come from.

In her Vote of Thanks, Elaine Samuel praised the speakers for airing their concerns over what they had witnessed while, at the same time, never leaving anyone in doubt as to their enduring love for the land and people of Israel. 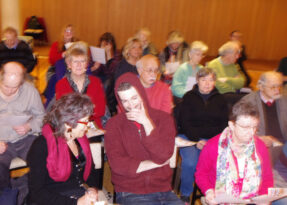 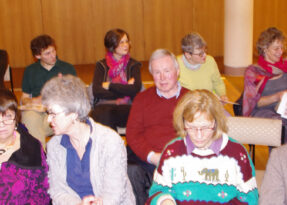 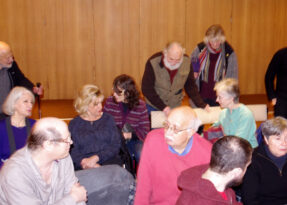 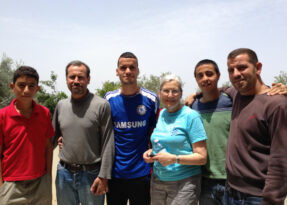 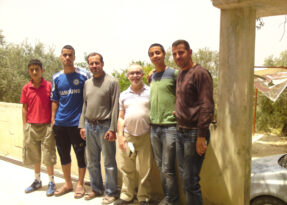 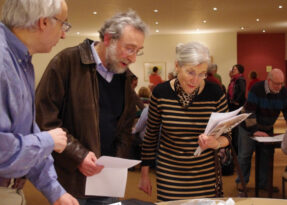 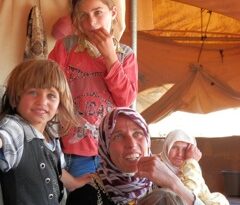 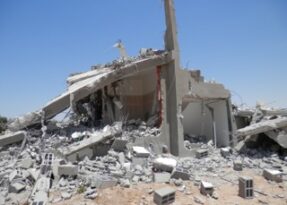 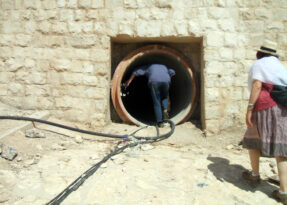 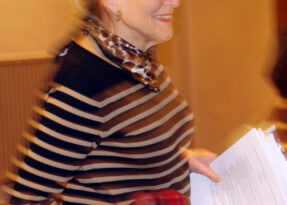 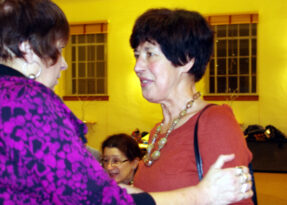 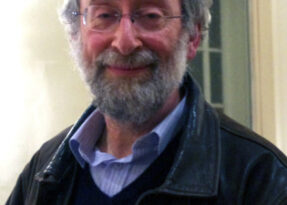 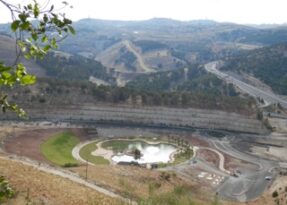 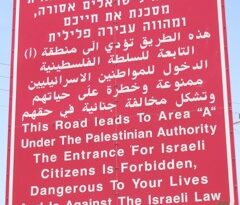 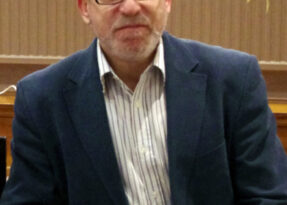 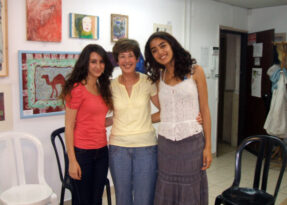 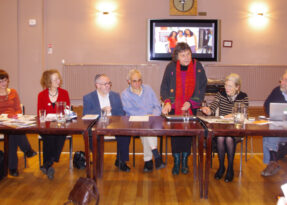 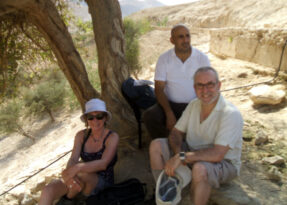 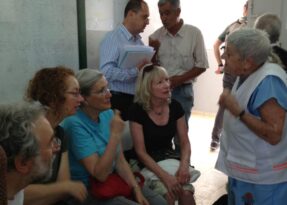 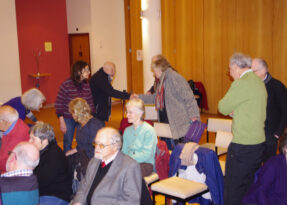